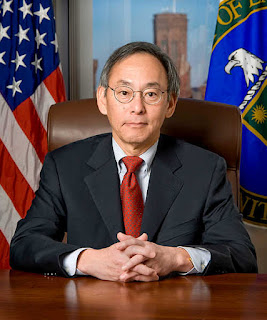 During his plenary he mentioned that the cost of battery storage could drop as low as $100 per kilowatt-hour capacity - about a quarter to of today's better prices. Batteries could be located at the periphery of the grid - built solidly to work "...even if a kid pokes it with a stick, or does whatever else kids do - like watering it with a garden hose."

I had a chance to ask the Secretary for more details - the time frame, the likely technologies, and the chances for an even better breakthrough or for the advance to fail. (He is known to relish technical questions and give very detailed answers.)

Dr. Chu gave batteries five to ten years to reach this lower price point. "$200 per kilowatt hour is a certainty," he said. He explained that just as LED lighting has "piggybacked" on technology developed for flat screen TVs, stationary batteries benefit from research in vehicle batteries.

According to Secretary Chu, advanced Lithium-ion batteries are doubling in energy density and halving in price - but there is the possibility of a "radical departure" - rechargeable metal-air batteries (like hearing aid batteries, but bigger). He said "I see very rapid technology development. These will be micro- or nano- utility scale that work in both very low and very high temperatures, which is important for utility applications. This will help the electrical system become more efficient."

Just as Moore's law brought us fast computers at exponentially lower price, "Chu's Law" will make electrochemical storage cost-effective. You don't need a Nobel Prize to know that a battery is needed to have solar power at night. The combination of grid smarts, community solar gardens, and low-cost batteries make possible a solar-powered future.
Posted by Joy Hughes at 2:49 PM