This post was originally published at Mosaic on 10/15/12.
We have enough solar resources in the United States to power the whole country many times over. And yet, most of us are still not getting our power from the sun. Even with leases making solar more affordable for more people, many others are still left out of the equation — including low-income families, renters, and nonprofits.
Crowdfunding a solar project
But what if you own your own house and can afford solar, yet your roof is just not suitable for it? That was the case for residents of University Park, Maryland, a town known for its forest of shade trees. Residents of this middle-class community were interested in solar power but didn’t want to cut down their trees. They had the resources to invest in solar, but nowhere to put the solar.
So a group of residents, led by David Brosch, got together to explore other options. They found a church in their community with plenty of sun, whose pastor and membership liked the idea of solar. Not only would it save the church money on their power bills — it would also support their passion for stewardship of the earth. 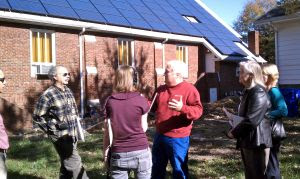 The Church of the Brethren and part of the group who made the project happen, being interviewed by a reporter from American Public Media’s Marketplace.
This was just the beginning of what turned into a 2-year project. After a lot of hard work — including getting legal advice from interested community members, forming the University Park Community Solar LLC, and meeting with the state’s SEC commissioner — in May 2010, a 99-panel solar PV system was installed on the Church of the Brethren.
The church is saving money — what’s in it for the rest of the community? The benefits are many. Producing solar energy partially offsets the payments everyone makes to the local power company, thereby reducing energy costs for the community. And investors can know they’re helping preserve the environment for everyone, even if not from their own roofs, as well as providing an educational opportunity for their children and a financing model that can be used elsewhere.
That financing model has provided an excellent return on investment, one that’s hard to come across these days. Community members were able to invest more than what is normally allowed in this kind of project — they put in an average of $4,000 each — and that fully funded installation of the $130,000 system. Investors are getting annual returns of 7% – 8% over the life of the project, with their investment fully recouped after 8 years.
Easing restrictions to investing
Given these numbers, why haven’t we seen more projects like this one?
Probably the biggest hurdle is securities laws. The laws that are in place to protect the “unsophisticated” investor also make it tricky to fund these projects. In fact, the University Park group had to get an exemption to Maryland securities law. They couldn’t advertise directly and had to keep their pool of investors to 35. And investors had to be Maryland residents. 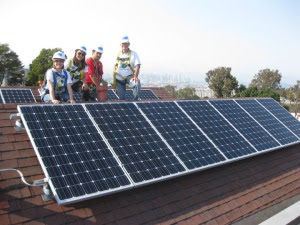 Volunteers installing solar panels. Soon, these same volunteers may also be able to invest in solar.
The good news is that these restrictions are starting to ease up, and that could change the funding landscape significantly.
Evan Wynns, founder of the San Francisco Energy Cooperative, currently solicits investments of up to $250 to fund green energy projects in the community. To avoid SEC restrictions, he can’t ask for much more than that.
He’s hoping that will change when the JOBS Act, a crowdfunding bill that will allow average citizens to invest in startup companies, goes into effect (though signed into law in April 2012, the JOBS Act requires that the SEC write rules on various aspects of the law). That could allow anyone with enough funds to make larger investments — in a relatively low-risk area with good returns.
And that helps all of us. Those who do have enough resources to invest in solar can put their money into something that directly helps those who don’t — as was the case with the Church of the Brethren. There are bound to be more opportunities. So get your checkbook ready, and let’s all work together to make solar available for everyone!
Posted by Rosana Francescato at 6:43 PM