Emergency at the North Pole 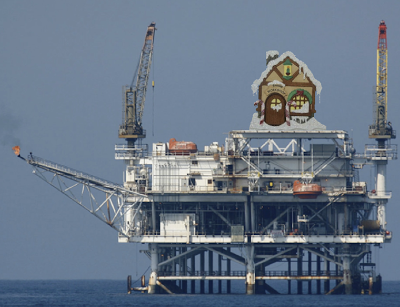 I know you’re supposed to be the ones writing the letters to me.  But this is important.  Let me start  by explaining a couple of things:

People wonder how we manage to deliver to everyone on a single night.  Think about it - the post office does that every day, and we only have to do that once a year.  What most people don’t know is we move the workshop every year with Sno-Cats® as the ice drifts across the North Pole.  When you’re doing distribution by air you can’t beat the central location in middle of the northern hemisphere.

It’s a good thing we’re almost never at the actual geographic North Pole, with those submarines coming up from under the ice, and explorers showing up all the time now.  Elves consider humans to be walking germ-bags – they’re the last surviving population of Homo floresiensis, and one flu germ could wipe them out.  I may be the physical manifestation of the spirit of Christmas, but my physiology is human.  I have to get so many shots before I go out, and even then, I have to go into quarantine for two weeks afterward. It’s okay - I need the rest.

But what I really need to talk about is Carbon Dioxide.  I need to talk about the oceans turning to acid, and the ice melting.  There’s going to be some kind of ice at the North Pole for a long time – at least most of the time.  It won’t be all of a sudden that the ice will melt off and the North Pole will be open water, but what we’re seeing is the ice getting thinner and breaking up more and more each year.  Nowadays we keep the workshop and all the employee housing on pontoons because we really are out in the ocean, the ice can open up at any time and swallow you up.  You can tell the ice is getting thinner; we really need multi-year ice to put down the four-foot anchors for our buildings.  We really notice when we get on some of this goofy first-year ice that’ll break at the first little wave, and we see that more and more.

The summer of 2007 was really something else – we had a crack in the ice sheet a mile wide go across the pole and through the middle of our operation, and about a third of our buildings including the stables wound up on the other side.  Our operations have been slowed down a bit ever since, and you know how important we are to the economy!  That was rough, but nothing compared to last summer, 2012, I couldn’t believe the ice reports – so much melted off that it started changing the weather and we got hit with an arctic cyclone.  Employee housing took a really big hit, some of the bolts came out of the ice and the buildings went over with the elves inside.  Luckily, no one was really hurt, but the cyclone broke up the ice even more, and we lost about half the ice cap. Half!

We’re a big operation in a harsh place.  Ain’t no holiday up here.  The ice has gotten so unstable, we’ve been contracting with the Russians to bring up one of these big bergs that’s breaking off of Greenland, they call them ice islands.  They’ll tow it with icebreakers and submarines.  The problem is how are we going to keep it from drifting?  No one has ever anchored a billion-ton object, especially not elves.  But if we can manage it, I’ll make it a refuge for the rest of the walruses and polar bears.  BP has let us know if we lease the North Pole for drilling, they’ll let us set the workshop up on one of their platforms, but I don’t think the Russians would like that. Maybe that’s why they’re so willing to help.

A melting arctic affects your weather as well. It breaks my heart when I get down there, and the chimney is all that’s left of the house, and I have to track down the kids in a hurricane shelter.  I live forever, and if you guys don’t get your act together I’m going to have to watch your beautiful cities fall beneath the seas.  It might turn out that Atlantis was not a legend of your past but a warning of the future you face.

You’ve been bad, but I am not going to give you any coal – I have to reduce my own carbon footprint. I’m a spirit of giving, and I don’t have a choice but to bring you all the stuff you’re asking for.  It’s bitterly ironic, being a saint that magically brings presents, now threatened by the very excess of that giving.  My back is hurting from carrying all this stuff, and you guys are hurting too, with your houses and garages and storage units packed full of stuff you don’t need and never will be able to use.

So I have to think, what if Santa stopped coming?  No more gifts as you face ruin in the whirlwind before Sandy’s claws.  What if you face ruin to measure your wastefulness, and eight reindeer forsake you for four horsemen?  Because I can’t just give, and give, and give – I have come to represent the myth of endless growth that without fail will lead to ruin.  People, I can’t do it for you. You have to put Santa on a diet.

The giving of a gift lasts just a moment, but the object itself is made out of matter.  Mater, that’s the Latin word for mother, and all you have temporarily in your ownership is a little bit of Mother Earth.  They come from her body, the temples of her forests, the dirt and stones that make her flesh.  To her they, and you, will return.  An object is touched by many hands - the hands that make it, your hands that keep it and care for it, and the hands that take it when you are done with it, and it embodies the time and life energy of all these people.  So if it is an object you give, make sure it will serve well, serve for a long time.  Become a culture of few things, beautiful things, useful things to pass to the next generation.  Such objects are expensive, and worth it.

Why do we give?  A gift is a celebration of our love, something people can remember and think fondly on our relationship, our shared experience.  We can de-materialize Christmas without reducing the love by one bit.  That’s why I like the Internet.  I can let the elves telecommute from home and write apps that you can give.  A book today will not require a tree to be cut down.  A photograph will not require chemicals to develop.  It sure cuts down the work if I only have to drive a virtual sleigh.

Give a subscription to solar power.  Give recycled.  Give a hand-me-down with a story attached.  Give good, healthy food and drink that can be enjoyed with love – especially if you grew or prepared it yourself.  Best of all, give of your heart, a poem or story or piece of art, the gift of your singing voice.  Give them a massage, a coupon for double digging the garden in the spring, or the right to borrow a favorite thing whenever they like.  Give your love.

And folks, we’ve got to shoulder into the hard work ahead, and give our most precious gift of all – our time.  When you take just the time to stop and think of what you really need, you are saving not just Santa Claus but your own dear children.  Celebrate each hour you volunteer shoveling the muck from Sandy, each solar panel you put up, every object you borrow or lend to your neighbors.  I’ll be a happy, skinny Santa with a smaller sack of gifts, twice the twinkle in my eye, and maybe, just maybe, enough ice to land my reindeer.