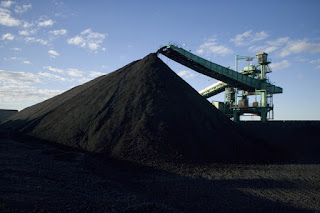 We hold these truths to be self-evident: that fossil fuels cause climate change and the extreme weather we’ve been seeing -- and that the world needs to wake up and kick the fossil fuel habit.

Sure, those of us who call ourselves environmentalists take those as truths, but a major coal company? Yet that’s exactly what the Australian BHP Billiton, the world’s largest mining company, has just copped to.

Explaining the company’s decision to retrofit one if its coal-exporting facilities against significant weather events, BHP Billiton executive Marcus Randolph was quoted as saying, “As we see more cyclone-related events ... the vulnerability of one of these facilities to a cyclone is quite high. So we built a model saying this is how we see this impacting what the economics would be and used that with our board of directors to rebuild the facility to be more durable to climate change.”

Yes, you read that right: climate change. You gotta love the irony. Not only is this major coal company acknowledging that climate change is real, but they’re investing in protections against the effects of said climate change -- which they helped cause. They’re making a significant investment to protect themselves -- from themselves.

At what point will a company like this decide that the costs of producing coal and other fossil fuels are no longer worth the return on investment? Weak prices have already led some coal companies, including BHP Billiton, to cut jobs. Add to this the cost of protecting their facilities from storms, and the ROI diminishes even more.

And there are other costs, as we’ve seen recently with Superstorm Sandy. We can’t put a value on people’s lives, the damage to communities, and the emotional effects of the storm. In pure financial terms, though, Sandy could cost $50 billion. What amount of retrofitting would it take to make cities like New York safe? Won’t we get a better ROI by investing in prevention?

Prevention would mean moving from fossil fuels to renewables. And Randolph seems to agree that we must at least limit fossil fuels. Referring to Australia’s carbon tax, he says, “there is not a qualifier saying it is okay to emit more greenhouse gases if the carbon tax is eliminated. An absolute ceiling is an absolute ceiling. Even if there isn’t a carbon tax, it still needs to be an issue we devote a lot of attention to.”

Randolph has even gone so far as to state, “In a carbon constrained world where energy coal is the biggest contributor to a carbon problem, how do you think this is going to evolve over a 30- to 40-year time horizon? You’d have to look at that and say on balance, I suspect, the usage of thermal coal is going to decline. And frankly it should.”

Strong words from a major contributor to the “carbon problem.” Why is BHP Billiton taking this position? Because climate change is affecting what the company cares about the most: their bottom line. Their main concern is profitability. Climate change is a threat to profits. So they’re doing what any sensible hard-nosed ballsy capitalist would do: they’re protecting their profits by investing in more durable facilities.

Could that same concern for profits lead beyond protecting against the effects of climate change to actually trying to prevent it? Maybe the lesson for environmentalists and policy makers is to understand what motivates fossil fuel companies. Forget about appealing to a green economy, solving world energy needs, and so forth. Tell them climate change is going to rob you blind unless you invest against it. And that means first admitting that climate change is real -- real enough to affect your profits and maybe even put you out of business.

Randolph’s statements, and the company’s actions, are already making news -- and they’re sure to make waves. If a large coal company like this one acknowledges the effects of fossil fuels, who are the climate deniers to turn to? Perhaps it’s time they faced reality and started working to reverse climate change. Perhaps concern for profits will force them to do so.
Looking to invest against climate change? Check out Mosaic, Sunfunder, RE-volv, The San Francisco Energy Co-op, and Everybody Solar.
This post was originally published on Mosaic.
Posted by Rosana Francescato at 3:36 PM