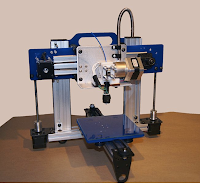 3D printing has the potential to do for manufacturing what the PC did for computing and what the solar panel is doing for energy. The ability to make things is becoming a commodity, available to many at low cost, decentralized, with innovation democratized.  Depending on how it is implemented, the technology could either increase or reduce energy usage and waste.  The production of energy and the making of things can both be close to the point of use.  No matter how it unfolds, the renewable revolution will be 3D printed.

Any new technology these days is going to undergo life-cycle cost analysis (LCA) to determine its degree of sustainability. Of particular concern are energy efficiency and the material streams involved. A 3D printer will typically use heat to melt or fuse the raw material to build the object. In some cases the process can use much more energy than traditional methods - Ecomagination reports: "Mechanical engineer Tim Gutowski, who heads MIT’s Environmentally Benign Manufacturing group, found in a 2009 study that laser direct metal deposition — a type of additive manufacturing where metal powder is deposited and fused together by a high-energy beam — uses hundreds of times the electricity, per kilogram of metal processed, as more traditional methods like casting or machining." Solar thermal technology can provide the heat needed, as in this crude but elegant method using a fresnel lens.

There is also the question of where the raw material comes from, and where it goes.  If it's cheap to make objects, a lot more junk than we already have could wind up being made (though that's somehow hard to imagine.) One could use something tremendously abundant, like sand, a byproduct of another process, like sawdust, or something we'd otherwise throw away, like old plastic bottles.  When automation brings manufacturing back to America's shores (without most the jobs), we can recycle millions of shipping containers we'll no longer need, not to mention those coal cars. It's also important for us to be able to recycle whatever we print, and unprint it back into its various component parts.

3D printers can save energy, materials, and time by printing objects with a fractal interior structure (think Eiffel Tower).  The larger the objects made, the bigger an advantage this is.  This will revolutionize construction with girders vastly stronger than steel of the same weight, and create vastly more transportation over land, air, and sea through ultralighting.

There are many advantages in using a general-purpose machine, with fewer material inputs, to replace numerous manufacturing technologies. This provides the opportunity for single-point optimizations for greater efficiency and better recycling.

3D printers can bring manufacturing closer to the consumer, with its attendant electric load.  Individuals and communities can have their own machines.  Along with electric vehicle charging, 3D home or neighborhood scale manufacturing could put stress on distribution and transmission grids. Urban solar power and neighborhood-scale energy storage can help alleviate these demand spikes.  In the countryside, SGI has found landowners clamoring to lease their land for solar. Without some on-site demand, it is often difficult in both regulatory and technical dimensions to get the power to the load. Micromanufacturing can bring the load to where renewable power is available, in farmlands and desert, for the same reason that data centers are located next to dams.

A 3D printer can be turned on and off quickly, allowing it to turn off in times of limited power supply or high power price.  Since 3D printers can make more 3D printers, it's easy to achieve an overcapacity that can absorb excess energy. In 2010, 25 Terawatt-hours of wind energy were curtailed in the United States due to lack of transmission or demand (a Terawatt-hour has a street value of about $100 million). Curtailment happens when power prices go negative - they'll pay you to take this nice, fresh renewable energy, so long as the wind is blowing at an inconvenient time of day, or the reservoirs are too full and need to discharge water through the turbines to make room for impending storms.  It's a tremendous business opportunity for anyone who wants free power, especially anyone who has a fleet of trucks that currently head back empty to distribution centers.

3D printing can provide a flexible domestic manufacturing base that can use renewable energy when and where it is produced.

3D printers can produce solar panels, and can make anything at all wrapped in a photovoltaic coating. Any object used outdoors (or placed in the window sill) could produce its own power. 3D solar cells can be more efficient than flat panels, capturing light that would otherwise be reflected away.  3D printers can also make batteries, so anything you make can power itself.  Solar thermal parts, micro-hydro turbines, wind turbines, wave power, and even thermoelectric devices for absorbing waste heat can all be printed. In short, 3D printers can make everything they need to power themselves.

Open source designs available over the Internet combined with easily replicable 3D printers will make technology transfer instantaneous.  The concept of the "solar breeder" is the use of solar energy to make more solar panels - 3D printing can breed all kinds of renewables worldwide.  A system with rapid energy pay-back time (say a combination of ultralight wind turbines and ultrathin solar panels) can spread exponentially and put a carbon-free energy system in place within a few years to a few decades.

One question that has to be asked when proposing an exponentially growing system is that of the sorceror's apprentice - will you have the power to stop it when it gets big enough and further growth would be counterproductive?  This is indeed the sort of problem we are facing with the current fossil powered, growth-based system.  Any desert tortoise displaced by a large solar farm can tell you that a system that we'd thought of as "renewable" really isn't, when it gets too big, and begins to overwhelm ecosystems.

Exponential replication could be used to implement one of a variety of potential geoengineering schemes, such as space-based mirrors, carbon capture devices, or fake icebergs to protect the Arctic.  This might save our butts from the worst effects of global warming, but with potentially severe side effects.

Another property of 3D printers is their ability to shift at any moment into (or out of) a war footing, at every scale from the U.S. military down to an individual printing out a gun. Your 3D printer could be attacked by an infected drone, which will make it print out more drones (though more likely it would just steal your designs).

Our 3D-printed future looks ultra-light, ultra-customized, ultra-efficient, and global.  Renewable energy can expect a world freed from many of the constraints that keep it from growing.  The flexibility and spatial distribution possible with 3D printing brings us closer to a 100% renewable civilization.
Posted by Joy Hughes at 1:08 PM