Solar Gardens
Solar*Rewards – Community Program
In 2011, Public Service proposes to add to its Retail DG REC acquisition by launching a new program based on House Bill 10-1342. The Solar*Rewards Community program, a solar garden program, will enable customers who cannot or wish not to participate in the Solar*Rewards programs an opportunity to participate in solar generation. Customers will purchase or lease shares of a solar garden installed in their community. Subscribing customers will receive credits on their bill for the energy produced at a central location, avoiding the need to install solar on their homes. This program provides Public Service customers with more solar program offerings.
For the RES Compliance years 2011-2013, the Solar*Rewards Community program will offer to purchase the energy and RECs from qualified solar gardens up to 6 MWs each year for the first three years. The offering will include up to 3 MW for standard offers of 500 kW or less. The other 3 MW offering, the Large program, will be handled through a competitive solicitation for systems greater than 500 kW up to 2 MW. The program structure, terms and conditions, and payment schedules will be detailed later in this section. Starting in 2014, the Commission will determine the minimum and maximum solar garden purchases the Company will target to acquire. 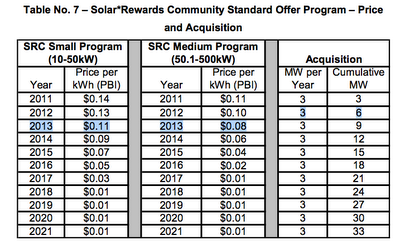 The acquisition plan for the Large Solar*Rewards Community Program is also up to 3 MW per year, bringing the total annual Solar*Rewards Community program acquisitions up to 6MW per year
Solar*Rewards Community – Large (RFP) Program
The Company will competitively solicit up to 3 MW of installations per year for the compliance years 2011-2013. The information for the bid program will be available on the Company website once the Commission’s rules for Solar Gardens are complete. The bid program pre-meeting will be held in the first quarter of every year with the exception of 2011, the schedule for which is yet to be determined, based on the issuance of final solar garden rules.
Project selection Standard Offer The applications will be approved on a first come first serve basis once all application requirements and Commission rules pertaining to solar gardens are met.
Large Program
The RFP for the Large program will be released once per year and developers can gain access to the RFP through the Company web site. The RFP will contain the requirements that need to be included in the bid. Once the bid requirements are satisfied, the Company will use the balance of quantitative and qualitative information to make the project selections. The mandatory selection criteria are as follows:
• Lowest levelized REC price per MWh
o Will be considered net of avoided cost
• Attached list of qualified subscribers
o Minimum of ten subscribers
o Copies of signed subscriber agreements
o Subscribers meeting the 120 percent annual average consumptions limitation and reside in the same county as the Solar*Rewards Community system
Acceptable low-income plan
Others as may be required by Commission final rules
The mandatory criteria will apply in the bid evaluation once the application has met the application and bid requirements and Commission rules pertaining to solar gardens.
Solar*Rewards Community Production Credit
All participating customers will receive a Solar*Rewards Community net metering “production” credit on their bill monthly. It will be based on the total monthly solar energy generated by the solar garden multiplied by the customer’s percentage or share, leased or purchased in the garden. This credit, expressed in dollars, is calculated by multiplying the customer’s share of the solar garden production by the Company’s total aggregate retail rate for the class in which the customer takes retail service from the Company. The credit will be reduced by a charge covering the cost of delivering the energy to the customer. Solar*Rewards Community customers will still contribute to the RESA and to the cost of Demand-Side Management programs.
The customer’s total electric use will be billed as it is billed today. The Solar*Rewards Community production credit will be displayed as a dollar amount after the monthly electricity use and cost total. The dollar credit will be subtracted from the customer amount due and the total amount due will be displayed below the production dollar credit. The bill credit is explained in detail in Section 9, Net Metering. An example of how the solar production credit will appear on the participating customer’s bill is displayed in Table No. 8 (figures are for illustrative purposes only). 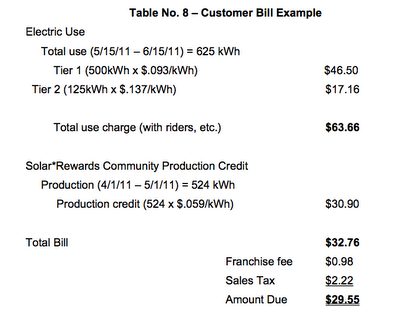 There will be a time lag of at least one full customer bill cycle between when the solar production meter is read and when the solar production credit for that particular month will be credited on the customer bill.
There are 21 bill cycles within the Company’s service territory. The Solar*Rewards Community system can serve multiple customers within any given county, so there could be customers on multiple bill cycles per Solar*Rewards Community system installation. Attempting to synchronize any one installed system with the various bill cycles would be a significant and costly administrative and capital intensive endeavor. This expense can and should be avoided by delaying reflection of the credit by one month.
Solar*Rewards Community Administration - Standard Offer Program and RFP Program
The system owner will be required to provide the necessary application documentation and meet the requirements stated in the Commission’s rules before the application will be reviewed for approval.
Due to the potential popularity of the program, and fairness to other applicants, an applicant may be withdrawn from the application process for lack of action after certain points in the application and installation process. The Company has determined two points where this could occur: 1) If one month has elapsed from issue of reservation form to which the applicant has not responded; and 2) if the solar installation has not been installed within twelve months from submitting the executed Solar*Rewards – Community ownership contract.
Tracking Customer Participation in the Solar*Rewards Community Program
Public Service will use an online application and tracking system and a REC operations payment system for all RECs and unsubscribed energy production. This system will also house a subscriber management system that will be accessible by the solar garden owners and used for inputting subscriber information, system allocation/subscriber and for managing subscriber additions/deletions to their system. Public Service will use the same database as the reference list for both customer validation of new additions and for monthly bill crediting. The online system is the public interface to the dataset that includes both Solar*Rewards - Community information and the application/subscriber management system for Solar*Rewards – Community owners. Public Service will include on its monthly reports to the Commission applicable information related to Solar*Rewards Community.
Solar*Rewards - Community Contracts
There will be a contract called the Solar*Rewards Community ownership contract. The contract will contain the terms and conditions necessary to accommodate the Solar*Rewards Community program offerings. The contract term will be for 20 years. The Interconnection Agreement used for the Solar*Rewards Community programs will be the same as used for the Solar *Rewards programs. Until the Commission issues final rules, the Company is unable to provide base contracts.
The Company anticipates different ownership contracts for 10-50kW systems, under the standard offer program, 50-500kW systems, under the standard offer program, 10kW – 2MW under the bid program
Reservation Deposits
Similar to Solar*Rewards, a reservation deposit will be required for each system application. The reservation fee is due within five days of an application’s submission. The Solar*Rewards Community Small program reservation deposit is $500 per application and the Solar*Rewards Community Medium program deposit is $1,500 per application. The Large RFP program requires a non- refundable $500 filing fee and a $5,000 project deposit, which is conditionally refundable. As with Solar*Rewards program, the final system size is allowed to vary +/- 10 percent of the size stated in the application.
If the project is not completed within twelve months, or if the project size variation exceeds ± 10 percent, the reservation fee is forfeited and credited to the RESA. Projects that are not completed within 12 months of the application date will be deactivated and will not be entitled to any REC payments under that specific application.
Posted by Joy Hughes at 1:42 PM